Bullion shortage panic – what to do

Bullion shortage panic – what to do An unsurprising consequence of the COVID-19 outbreak and the resulting flood of easy money (dwarfing even that of 2008) is a surge in demand for physical gold and silver. The spike in demand for bullion coins is so strong, some mints sold their entire inventories in record time. This has happened before, but this time, mines around the world are shutting down as whole countries go on lockdown.

Suddenly, there’s a shortage—and it may last much longer than the current relatively low prices—especially for silver. Some buyers are panicking.

And not without reason. I tried to buy some physical silver when prices dipped below $12 two weeks ago. I found that even high-volume dealers like Kitco were out of stock. (I don’t work for Kitco, and they don’t pay me to mention them; I simply cite them as a well-known dealer familiar to readers.) 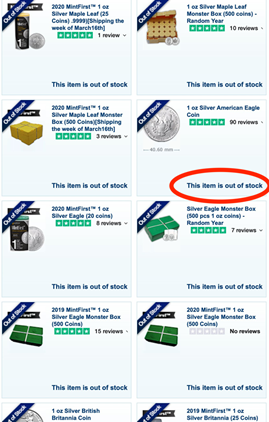 What Does This Mean?

The US Mint sold 152,000 ounces of Gold Eagles in 2019. The World Gold Council estimates that global gold trade over the last 10 years was been between 130 million and 160 million ounces of gold per year. There are other coins and other mints, of course, but the fact remains that the entire bullion coin market is a tiny fraction of the global gold and silver markets.

The big ETFs and central banks aren’t popping down to their local coin shop for Eagles and Krugerrands—they buy gold bars by the truckload.

This means that gold and silver enthusiasts should not expect the shortages and high premiums they’re facing to have any significant impact on the spot price of gold or silver.

All the bullion coins in the world are little more than trinkets to the paper-gold traders in New York. They’re still distracted by things like the apparent strength of the USD in foreign exchange markets. They couldn’t care less if the US, Canadian, and Australian mints were all out of stock at once.

That doesn’t mean gold and silver prices won’t go up—just that they won’t do it because of the shortages retail investors are experiencing.

Fortunately, the fundamentals are on our side. That’s assuming you’re as keen to buy monetary metals—gold and silver—and related stocks as I am.

I think silver is going to $25 per ounce or more this year—and much higher over the next couple years. So should I just go with the current reality and pay $20 per ounce now, even though silver is still under $15 as I type?

To each his or her own… but I have not done so.

For one thing, just because mints were caught flat-footed and sold out doesn’t mean there won’t be any more bullion coins until after the COVID-19 outbreak passes. The mints have inventory of metals for fabrication that they are surely digging into now. They’ll also have contracts for delivery, not all of which will be subject to shutdowns. What if the mints themselves shut down? That could happen, but such shutdowns wouldn’t last as long as the pandemic itself.

For another, just because I think gold and silver will head higher this year doesn’t mean they’ll go straight up from here. That’s especially so for silver, which is also an industrial metal, subject to selling on bad economic news. That’s what took prices under $12 last month. And it could easily happen again.

I might pay a high premium if I have to, but I won’t do it until gold and silver are on a strong upward trend, making the odds very much against me getting in at lower prices.

Some readers have asked if they should sell some of their bullion in order to load up on gold and silver stocks in what looks to be shaping up to be the buying opportunity of the decade.

Personally, I see my bullion as savings. Savings have many uses. We tend to think of them as rainy day funds—which they are—but that’s only one use. Dipping into savings to buy a new home or to invest in a new business is a perfectly normal and potentially profitable thing to do.

The same could be said of liquidating savings in order to buy into what could be a life-changing speculative investment opportunity.

I confess I’ve been tempted to do this myself… but I have not done so.

One reason is specific to me: I poured most of my savings into starting my own company in 2018. It’s still a high priority for me to rebuild my savings, so I’m very reluctant to dip into them.

The general reason is that selling bullion to buy stocks is exchanging safe-haven holdings for risk assets.

Honestly, this weighs more heavily in my mind than my own specific reason. Gold and gold stocks are completely different things. I own one for prudence and the other for profit. These purposes are not interchangeable.

So again, to each her or his own. But anyone who dips into their savings to speculate—even if it’s the speculation of a lifetime—must be fully aware that they’re trading the security of physical wealth for possibilities that include much greater and much reduced wealth.